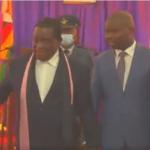 This comes after a video of the President, who was captured appearing drunk at a fundraising dinner at State House last week, was leaked and went viral on social media platforms.

READ MORE: “Mnangagwa Took A Drinking Oath In The 1970s”

Addressing the media on Thursday outside the Parliament Building, a state security detail who only identified himself as Raymond, said scribes should know that the “sword is mightier than the pen”. Raymond said:

We know that there are rules and regulations wherever we go. Even when dealing with the president, there are certain pictures that you are not supposed to capture, and some you are allowed to.

They say the pen is mightier than the sword, but I still believe the sword is mightier, and here we have our swords and if we decide to unleash them, things may not end well for you.

One journalist who had reportedly captured Mnangagwa disembarking from his official ZIM 1 vehicle, was pulled from the media crew gathered and ordered to delete all the pictures he had captured.

President Mnangagwa was at the Parliament Building for the presentation of the 2022 national budget statement by Finance and Economic Development Minister Mthuli Ncube.

Meanwhile, last week presidential spokesperson George Charamba dismissed claims that the President was inebriated, saying he only takes alcohol in the first six months of the year, a routine drinking habit he has observed for over forty years.

only takes alcohol in the first six months of the year