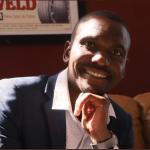 NewDay journalist, Blessed Mhlanga, has said he will be sleeping in police cells on Monday night after the Zimbabwe Republic Police (ZRP) changed his charges from disorderly conduct to assaulting a police officer.

Mhlanga said he was initially arrested on Friday night for taking pictures of police offices at Zindoga shopping centre in Harare. He said:

Last night I was arrested n detained by @PoliceZimbabwe for taking pictures at Zindoga, of police offices. I was detained without charge 4 3 hrs. A policeman struck my mouth with a fist, my teeth curved in killing my smile. Only released with @misazimbabwe help.

Mhlanga was charged with disorderly conduct and was detained for two hours. He said he had to visit the hospital for treatment. He narrated the ordeal:

The police officer who attacked me, landing a fist in my face and almost breaking my jaw is called Patsikadowa. Together with a group of 4 others they then took turns to beat me as I was bleeding through the mouth. I pleaded with them 2 stop, but it got worse. It was hell.

Patsikadowa held on to handcuffs on me, he squeezed them hard until I could not feel my thumb. This while his colleagues beat me and pull my privates. He said to me “I won’t let you go until you pee in your pants, I wanted to Pee on myself so that he lets me go. Nothing came

They walked in handcuffed from Zindoga to Waterfalls police in handcuffs in the dark. I feared for my life, I thought they would kill me. Thought of my kids and wife. It was the worst moment of my life. I was happy to get to the police station. Going to the cell was a relief 🥲

I was also happy that the police officer who had attacked me made it easy for me to track his identity. He tried to force me to pay a fine, by threatening me with a cold police cell. He tried to cover his back by making me pay a fine as if it was a favor. Well I refused

My brother @TabaniMoyo of @misazimbabwe dispatched a lawyer, @ChrisMhike who negotiated my release on medical grounds. He also demanded my assault case be recorded as it had been ignored. A police officer wrote the statement and I signed it after correcting my name.

I am struggling in pain, delivered at the hands of @PoliceZimbabwe like many others who died in police custody, I could have been dead. Patsikadowa gets taxpayers money to serve and protect. He is just a killer in police uniform. I am lucky to be alive today.

In an update on Monday, Mhlanga said his case had been changed from disorderly conduct to assaulting a police officer. He said:

I will be sleeping in police cells today after @PoliceZimbabwe changed the charges against me from disorderly conduct to assaulting a police officer 3 days after. I have been reporting 2 the police every day by myself. I don’t know why they want to detain me. I am shocked.

Police officers have on several occasions been accused of brutality against journalists and other members of the public.

ZRP is behaves like a criminal organization. It's saddening and embarrassing to have such unprofessional people policing our great country that we fought hard to liberate

That's why sanctions will always be maintained

"He said to me “I won’t let you go until you pee in your pants, I wanted to Pee on myself so that he lets me go. Nothing came".....