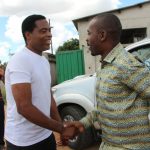 Former war veterans chairperson Jabulani Sibanda has announced he was rejoining the governing ZANU PF. He made the announcement at the party’s meeting held at an undisclosed location.

He had been off the radar since 2014 when the now late Robert Mugabe arrested and dragged him to court for over a year, accusing him of undermining him accusing him of planning a bedroom coup. He was linked to the former Vice President Dr Joice Mujuru’s camp.

However, in a video, a buoyant Sibanda rebuked criminals who he said had taken over the revolutionary party and needed to be weeded out if the party was to be reorganised. He said:

They come and hide in the party and commit crimes, then people hate the party saying it is full of criminals.

To the criminals, I say, it is now quarter past, it is time up. I do not care if you campaign by denigrating my name, but this party knows when Jabu is there the party will reawaken.

This party will rise ideological and in principle, it has to be reorganised structurally and ideologically.

If you do not know the aims of this party, take a step back.

Sibanda’s name became synonymous with violence between 2008 and 2013 when he intimidated mainly rural folk, encouraging them to vote for ZANU PF.

In 2015, Sibanda addressed MDC Renewal inaugural congress where he invited the opposition party to join hands with the People First political outfit in dislodging ZANU PF.

The Observer 6 months ago

JABULANI IS A KILLER. HATIMUDI. LET HIM GO WHERE HE WAS. ZANU PF IN MATEBELE LAND YATOFA. PEOPLE HATE THIS MSN. LET HIM MAKE HIS PARTY, MR PRIESIDENT.
MUSAMUPA MUKANA MU ZANU PF. I THINK MR. MUNANGAGWA KNOWS THIS MAN VERY WELL, HE WILL COMMENT
AFTER 7 YEARS KKKK, HE WANT TO REJOIN.

BECAREFUL MA ZANU PF ANGU.
GRADE HIM OUT OF THE PARTY
AS QUICKLY AS POSSIBLE

This guy brought fear to villagers for real.He used to carry a gun , AK 47 in his meetings with villagers

US$0 Harare
Ranga 6 months ago

It's cold out there