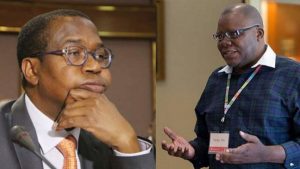 Biti speaks after Ncube posted on Twitter announcing that he had been named by a francophone magazine, Financial Afrik, among the top 5 Finance ministers in Africa.

After the announcement, Ncube immediately took to Twitter, hailing the magazine for its “qualitative analysis of candidates,” there were blowbacks by a string of experts, including Biti and leading economist, Tony Hawkins. Biti told Standardbusiness:

I find those tweets (by Ncube) so disturbing.

They are pathological, sycophantic. Who blows his own trumpet? The magazine in question, from Senegal, is an innocuous little publication. More than that, it is a very skewered publication. The economy does not need a spokesperson; it speaks for itself. When the economy functions the citizen is happy, buoyant and aggressive. The average Zimbabwean is battered, bitter.

Tony Hawkins, a former economics lecturer at the University of Zimbabwe’s Graduate School of Management, said with the second-highest annual inflation rate in the world and a string of unachieved targets, there was little that Ncube could celebrate for.

Hawkins told Standardbusiness that the value of the currency fell from 100 US cents per dollar at the time Ncube took over to less than one US cent.

In his Twitter post, Ncube the ministers in the top 5 were judged to have implemented transformative economic policies with results.

At times these journalist are paid or brubed to write good reviews about somepne, because this is not making sense