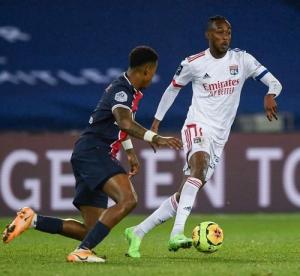 The Zimbabwean international whose form dipped this season had attracted interest from several European clubs, with Reims, Troyes and Lorient reportedly keenly watching him.

Several clubs continued their pursuit of the forward until the final hour of the transfer deadline on Monday.

Lyon hierarchy, including Dutch coach Peter Sylvester Bosz, believe Kadewere was the team’s valuable asset despite that he has since struggled for form this season, having been plagued by injuries.

He has only played just six matches, from the bench, with no goal to his name.

Kadewere had an explosive start to Ligue 1 giants, Lyon, in the 2020-2021 season after banging in 10 goals in 33 matches and providing three assists in 24 starts as Lyon finished fourth behind French Ligue 1 champions Lille, PSG and Monaco,

The Zimbabwean forward is battling to hold down a place in the team, which has a forward line featuring the likes of Moussa Dembele, Toko Ekambi, Raya Cherik and Bradley Barcola.

Kadewere also failed to impose himself at the African Cup of Nations finals in Cameroon, as the Warriors displayed a poor show that saw them exit the tournament in the group stages following defeats to Senegal and Malawi.

However, his brother Prosper, while acknowledging things have not been the same for Kadewere since his return from injury, said the fact that the coach was giving him some game time showed they had faith in him. He said:

I think this is normal in football. Every player goes through that, it’s a phase and Tino’s time will come. The fact that the coach is giving those 20 or 30 minutes is a vote of confidence in his abilities.

Remember, since his return from injury, the team has been scoring goals and in your opinion, what would be the reason for the coach to change the team? The most important thing is he is in there and his time will come.

With the departure of Olympic Lyon striker Islam Slimani, who moved to Sporting Lisbon following the termination of his contract, it means one competition less for the Zimbabwean international.