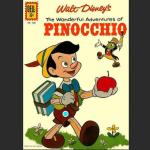 The Italian embassy on Friday handed over 1 000 books of the popular fairy tale of Pinocchio to the Ministry of Primary and Secondary Education for distribution to 500 schools from across the country.

The book, The Adventures of Pinocchio, has been translated into Shona and titled just Pinocchio (Pinokiyo), was written by Italian writer Carlo Collodi and was first published as a book in 1883.

The handover occasion was held at the Harare City Library and witnessed by the Ministry of Primary and Secondary Education acting permanent secretary Gabriel Mhuma and National Arts Council of Zimbabwe (NACZ) deputy director Josiah Kusena.

Pinocchio —  a translation from the Italian title Le avventure di Pinocchio —  is a classic children’s novel that tells the story of the little puppet who wants to be a real boy and is perhaps best known as the basis for the 1940 Disney film adaption, Pinocchio.

However, Pinocchio is a character by the same name in the book that was carved out of a piece of wood by an old, poor wood-carver named Geppetto.

Pinocchio acts like a human child: he frequently gets into trouble and is often impulsive and mischievous.

Italian embassy consul and cultural attaché Massimo Amadeo said the book has important moral lessons for children, that disobedience does not pay, telling lies is rarely prudent and that boys who love and take care of their parents will be rewarded.

It has been translated into more than 300 languages, with an English language version first appearing in 1892 and was released under a number of titles.

The book was translated into Shona by Zimbabwe’s own academics, former NACZ director Elvas Mari and writer and educationist Ignatius Mabasa, and illustrated by Antonella Bargione.

US$0 Harare
Black Jack 6 months ago

Mmmmm l would love to get one for myself. Please why do we have to criticise everything. Reading is like a hobby. It teaches, entertain, inform and is stress free. Write yours if its not boring we might read it too.

Thanks for the donation

Pinocchio good book with lessons for both kids and elders. Would love to read it again. Should be an inspiration to local writers.

We HV many writers in this country many... Wy tht much far Italian people we are differen...

We need our own stories. I don't think there will ever be a Shona book that'll be translated to Italian. Nxa

Why not. Dont have an inferiority complex. Vana mbuya Stella Chiweshe vari ku German wani through the promotion of our culture.

Its just a donation🤗