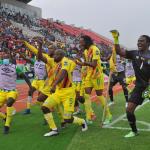 Mparutsa, a Dynamos legend who won the Soccer Star of the Year award in 1982 when he was only 19 years old, said that there is a need for a development plan that focuses on juniors, especially the Under 17, 20 and under 23.

In a post on Facebook after the senior national team was humiliated at the ongoing Africa Cup of Nations (by losing 2-1 to Malawi), Mparutsa, nicknamed “Short Cat” during his playing days, argued for full time coaches for junior teams who will conduct coaching clinics in every corner of the country. Below is Mparutsa’s full Facebook post:

We lost to Malawi and the focus will be on the coach. But can we look beyond the coach and do a root and branch analysis.

Our football has been going down for a while. Qualifying for Afcon has covered over the cracks. However, the cracks are there to see and soon it will be the whole building collapsing.

I was lucky enough to play in a star-studded junior team soon after independence in 1980.We had Ephraim Dzimbiri, James Takavada, David Zulu, Joel Shambo, Stanley Ndunduma, David Mwanza, John Phiri,Edward Katsvere among others. Guess what? All these players were in the team which won the Cecefa Cup in 1985.

In 1982, I won the Soccer Star of the Year award I was only 19. Stanley Ndunduma also won the award when he was only 20.

How was it possible that we had a glut of so many good young players in most clubs and who also played for the National Team?

I became Zimbabwe number 1 keeper at 19. Why do we not have exciting young talent emerging from our league.?

The answer lies with the junior structures. We need a development plan to ensure we revive the age groups such as the Under 17, 20 and under 23.

We need full-time coaches who work with the junior teams under the supervision of the National Coach.

The coaches should have enough time to visit teams and conduct coaching clinics. They should cover every corner of Zimbabwe.

Schools should also take Sports and Football in particular seriously. All the benefactors who offer houses and money to the Warriors should start with the Junior structures. Let this money go to the kids.

How do you build a house without a Foundation? The foundations are the schools, the junior teams and the Academies. These should be monitored to ensure that the proper football curriculum is being followed.

Football Leadership should be made up of people who care about football. People who want to see football development. There are many such leaders, we just need to give them a chance.

What we used to do in the past allowed a lot of young players to emerge. It made teams like Dynamos, Highlanders and Caps United very strong and with that, the league was very competitive. A strong league will feed into the National Team and we will compete again.

The Diaspora constituency must strengthen the development trajectory. Here we need unity of purpose among the stakeholders.

The young players who are 17,18 or 20 should come through the junior teams. This is why we need the junior structures to be vibrant. Once we have these up and running, it will be easy to utilise our best talents.

With the Warriors, there is always hope which is quickly replaced by disappointment. But it is not too difficult to do the right thing.

Let us revive those dead structures. Let us have a deliberate strategy. At the moment we have no strategy and hence we cannot expect miracles.

We can do it and I for one am ready to help.

YOU CAN NOT EXPECT TO GO TO AFCON AND PERFORM WONDERS WHEN YOU DO NOT HAVE YOUTH LEAGUES, UNDER 17, 20 AND UNDER 23.

OUR ZIFA AND REGIONAL STRUCTURES MUST BE MANNED BY PEOPLE WHO PLAYED OR WERE INVOLVED IN SOCCER ADMINISTRATION FROM TENDER AGE.

THE KAMAMBOS, THE DUBES, THE CHIYANGWA'S ETC CAME FROM SOCCER SUPPORTERS POOLS OR FROM RICH PEOPLE WHO WOULD AT TIMES BAIL OUT ZIFA WITH A FEW STOLEN THOUSANDS. YOU CAN NOT WIN SOCCER TOURNAMENTS WITH SUCH ADMINISTRATIONS.

DO NOT MIND EVEN IF FIFA BANS ZIMBABWE FROM FUTURE SOCCER TOURNAMENTS. LET US GET THAT OPPORTUNITY TO RESTRUCTURE SOCCER IN ZIMBABWE. SRC HAS STARTED THE PROCESS.

US$0 Harare
Nimrod mandishona 4 months ago

Pasuwa was given a chance and he failed. Ngadzoke ukuthini? Thats your problem as Zimbabweans you want to keep repeating the same mistakes over and over.