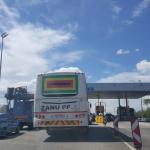 A major player in the transport sector, Leonard Mukumba, is a candidate in ZANU PF Manicaland provincial elections that are being held this Tuesday.

Mukumba, who owns Inter Africa Buses, is contesting the post of secretary for transport.

He has previously refused to join politics insisting he wanted to focus on his business.

In the 2018 general elections, ZANU PF supporters asked Mukumba to contest for the Makoni South Member of Parliament seat but he refused to budge.

A ZANU PF central committee member in Manicaland, who refused to be named, confirmed Mukumba’s candidature to NewsDay.

In a recent interview with the publication at the African Apostolic Church’s Mapembe shrine in Odzi, Mukumba, who is a bishop in the church, said he was one of the biggest transport operators in Zimbabwe. He said:

I was blessed by Paul Mwazha to become one of the biggest transport operators in the country, I joined the African Apostolic Church in 1989 and I could accompany our leader Mwazha who prophesied that I was going to be a transport mogul.

The African Apostolic Church was founded by Paul Mwazha and the congregates had gathered at Mapembe Shrine to celebrate his 103rd birthday.

Blessings come from God not from a man as stated in your alleged assertions Mukumba.

Join politics and get broke🐸