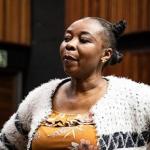 The court sentenced Ndlovu, dubbed the insurance killer, to an additional five years for defeating the ends of justice and another 10 years for the fraud conviction.

Ndlovu’s luck ran out when she was filmed by an alleged hitman while plotting to kill her sister, her sister’s children and elderly mother, allegedly in a bid to benefit from insurance fraud.

She had arranged for her sister and her children to be killed in a fire at her house.

Judge Monama found the State proved its case beyond a reasonable doubt and rejected Ndlovu’s defence as not reasonably and possibly true.

Very selfish.Mwoyo wakaoma.The love of money the root to all evils

That's what she derseves she must be hanged too

This woman is evil, She deserves to be hanged too.