Injured Nakamba May Miss The Rest Of The 2021/22 Season 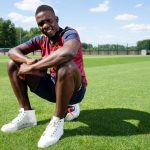 Warriors midfielder Marvelous Nakamba could miss the rest of the 2021/22 season after injuring his knee in the 1-0 defeat to Liverpool on Saturday.

Aston Villa will decide within the next 48 hours as to whether or not Nakamba will require surgery on his knee, The Athletic reported.

Nakamba (27), was substituted during Villa’s defeat to Liverpool with what was thought to be a groin problem.

Aston Villa coach Steven Gerrard confirmed in his press conference on Monday that Nakamba’s injury is worse than first thought. He said:

We sent him for an MRI scan and the news that has come back is not good.

The idea is to send him to a specialist on Tuesday and we’ll then know more about the damage and what we’ll need to do going forward.

Nakamba joins a growing list of Warriors stars who will miss the AFCON finals in January and February next due to injury.

Marshall Munetsi and Brendan Galloway have already been ruled out of the continental tournament due to injury.

Get well soon my bro