Injured Galloway Will Not Play Again This Season 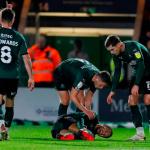 Brendan Galloway will not play again for Plymouth Argyle this season following an operation to repair a torn patellar tendon in London on Wednesday last week.

The Zimbabwean international was injured while trying a shot during the League One game against Wycombe Wanderers at Home Park on 23 November.

The surgery was carried out successfully by top consultant knee specialist Sam Church who said Galloway faces anywhere up to eight months out of football.

Galloway signed a short-term contract at The Pilgrims as a free agent in the summer until January 2022 after leaving Luton Town.

Plymouth Argyle manager Ryan Lowe said they will stick with Galloway which he believes is the morally right thing to do. Said Lowe:

He has had an operation. He has had his patellar tendon restructured so it’s a long, long road for Brendan.

I don’t really know the timescale but I think it could be six to eight months potentially so he definitely won’t kick another ball this season.

He’s in good spirits. The operation went well. He went and saw the best specialist there is, Sam Church, up in London.

He has been treated well, he’s recovering now and we are with him all the way until he has recovered properly.

PlymouthLive reported that Galloway will be offered an 18-month contract with Plymouth Argyle as he embarks on the long journey to full fitness.