India: Thieves Steal A Wheel Of A Mirage Fighter Jet 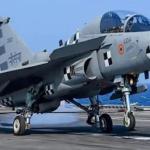 Unidentified criminals stole a wheel of a Mirage fighter jet from a truck that was carrying a consignment of military goods that was bound for Jodhpur airbase from Bakshi-Ka-Talab airbase in Lucknow, India.

The theft took place in the late-night hours of November 27 at Shaheed Path in Lucknow, the capital city of the Indian state of Uttar Pradesh, where the truck was on its way to the Jodhpur airbase.

The truck driver, Hem Singh Rawat, confirmed that he was carrying the consignment of military goods from the Bakshi-Ka-Talab airbase.

There was a traffic jam on Shaheed Path and, taking advantage of the situation, the criminals travelling in a Scorpio vehicle, snipped off the strap used to tie the tyre and committed theft.

By the time the truck driver came to know about it, the thieves had escaped. He called the police, who arrived at the spot and started investigating.

The truck driver said the thieves committed the theft between 12:30 am to 1 am when there was a jam on Shaheed Path due to which the truck was moving slowly.

Deputy Commissioner of Police (DCP) East, Amit Kumar, said the culprits would be arrested soon and action would be taken against them.

But one vhiri re jet kikikikiki🤣🤣🤣

12am to 1am traffic jam, then i love my country