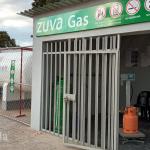 The shortage of liquified petroleum gas (LPG) in some parts of the country has been blamed on congestion and delays in clearing human and cargo traffic at the Beitbridge Border Post.

In Bulawayo, some consumers said they could not find gas from their regular suppliers since last week.

An official at a Value Gas outlet in Belmont, Bulawayo, confirmed the gas shortages. Said the official:

We do not have gas these days. You can check in the next two days as our trucks are still at the border.

An official from another supplier, Ecogas said gas shortages during the Christmas and New Year holidays were normal due to the rise in demand. The official said:

Gas is being transported by road and when there is a delay in clearing cargo at the Beitbridge Border, it affects deliveries.

There is nothing new from what we are experiencing now, usually during the festive season and during the winter season we experience an increase in demand which results in some shortages.

The Zimbabwe Energy Regulatory Authority (ZERA) set LP gas prices for December at US$2.14 and $225.92 per kg but many gas dealers sell in foreign currency at prices slightly below the official price.

Power cuts and the rising cost of electricity are some of the factors behind increasing LP gas consumption in Zimbabwe.