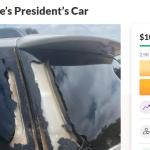 An initiative by MDC Alliance supporters to raise US$120 000 to buy a bullet-proof vehicle for their leader Nelson Chamisa has seemingly angered ZANU PF.

However, a legal expert, Professor Lovemore Madhuku told The Standard that there was nothing wrong with the fundraising by the MDC Alliance supporters and any attempt to seize the vehicle will be illegal and an abuse of power. Said Madhuku:

There is nothing wrong with party supporters coming together to buy their leader anything.

These are ordinary people who can come together and buy their leader a vehicle. They are not foreigners and this is not foreign funding.

It is not prohibited under the said Act and it will also be evil if anyone prohibits that initiative by the supporters.

It’s like when you are on a campaign trail and someone wants to cook for you or provide transport for you, it is not prohibited and cannot be prohibited by the Political Party Finances Act or any other law.

There is nowhere they can impound this. It will be an abuse of power and very illegal.

There is no provision that allows that. When a vehicle comes, as long as it pays duty and all those other things, they cannot do anything.

Another legal expert, Bulawayo-based Nqobani Sithole, said as long as the vehicle was declared and was transported legally into the country and duty was paid for it, then there would be no justification to impound it. Said, Sithole:

The mischief of the Political Parties Finance Act is to avoid clandestine donations.

However, if it is declared, and there is no violation of any law, for example, the Foreign Exchange and Money Laundering Act, then that kind of donation will be above board.

The law provides for this, but that can be an exception as long as it is declared. At the end of the day, whatever resources parties get should be made clear.

There should not be any clandestine dealings, and sources of finance should be known by the regulating authorities.

Posting on Twitter, Mangwana suggested that there was reasonable justification to confiscate Chamisa’s vehicle as happened with the late MDC founding president Morgan Tsvangirai’s BMW X5 which was impounded by the police in Lupane in 2008.

Meanwhile, MDC Alliance secretary-general Chalton Hwende said the party was pushing for the release of Tsvangirai’s vehicle in Lupane and other MDC vehicles being kept in Gweru.

THOSE OF YOU LADIES AND GENTLEMEN WHO HAVE BEEN FOLLOWING THIS INITIATIVE BY THE CAMARADA BASVI AND OTHER DIASPORANS OF BUYING AN ARMOURED VEHICLE FOR MDC ALLIANCE LEADER, NELSON CHAMISA, CAN STILL REMEMBER MY ADVICE TO CAMARADA BASVI.

I ADVISED CAMARADA BASVI TO ENGAGE REPUTABLE LAWYERS AND FREIGHT FORWARDING FIRM TO CLEAR THE WAY FOR THEM.

I SUSPECT THAT THIS ISSUE WAS A SUBJECT OF DISCUSSION IN POLITBRO OR CABINET BECAUSE MANGWANA COULD NOT HAVE PUBLICLY SAID IT.

NOW SENIOR LAWYERS HAVE JOINED THE FRAY. THEIR LEGAL OPINION IS THAT IT WOULD BE UNLAWFUL FOR ZANU PF GOVERNMENT TO IMPOUND THIS VEHICLE.

I AM SURPRISED AS WHY ZANU PF WANTS TO STOOP SO LAW TO IMPOUND THIS VEHICLE UNDER THE AUSPICES OF POLITICAL PARTIES FINANCE ACT. THE CAR IS FOR PERSONAL SECURITY OF MDC ALLIANCE LEADER, NELSON CHAMISA. THE CAR IS NOT FITTED WITH AK 47 RIFLES, FN RIFLES, MOTOR BOMBS, GRENADES OR BINOCULARS.

IT IS SOME OF THESE DOINGS WHICH TARNISH PRESIDENT ED MNANGAGWA'S IMAGE. I REMEMBER VIVIDLY PRESIDENT MNANGAGWA TELLING THE WORLD AT HIS INAUGURATION THAT HE WILL NIP CORRUPTION IN THE BUD AND RETURN THE COUNTRY TO DEMOCRACY. ALAS !!!!! SOME PEOPLE ALLEGE THAT THINGS ARE WORSENING.

IT WOULD SEEM THAT THIS PROMISE IN THE AFTERNOON OF ONE CLEAR DAY IN NOVEMBER 2017 HAS NOT BEEN FULFILLED.

IT WOULD SEEM THAT THESE GUYS FORGET THAT THEY WILL ONE DAY BE IN OPPOSITION POLITICS. LAST YEAR CAMARADA EDGAR LUNGU WAS A FULL ZAMBIAN PRESIDENT WHO RUBBISHED HIS COUNTRY'S HIGH COURT JUDGEMENT NOT TO SEND BACK TO ZIMBABWE TENDAYI BITI, BUT GRANT HIM REFUGEE STATUS.

US$20.00 Harare
Unifier General 5 months ago

Yaah ndoopaunoona kuti matofo aya apererwa zvokwadi. They'll try every trick in the book just to flex their muscles then go on to call themselves a democratic party (sies). From this day onwards I'm now a #NHM advocate