I'm Ready To Make The Warriors Jersey My Own - Mhari 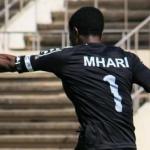 FC Platinum goalkeeper Petros Budro Mhari has said he is ready to fight for the Warriors goalkeeper jersey hinting that he will be the first goalkeeper from now onwards if the coach gives him the chance to prove himself.

Zimbabwe has in recent years been shuffling goalkeepers as those who were tried have not been convincing.

In the past 4 seasons, Mhari conceded 40 goals in 134 league games between the 2016 – 2019 seasons. Speaking on his call up to national duty, Mhari said is now a big boy who deserves a chance. He added:

This is the fifth time I have been called into the national team set up. I think I have gained valuable experience over the years. It is a massive responsibility leading my club in the African Safari and league. That is how I see it, now my goal is to translate the same performances, drive and focus to the Warriors, a personal goal that has kept eluding me.

For the 5 times, I didn’t really play. I was on the bench learning and gaining valuable experience. If the coaches select me against South Africa on Friday am ready to make the Warriors jersey my own.

I promise I won’t disappoint having waited this long and now is the time.

Mhari is one of the most decorated players currently playing in Zimbabwe.

He has won the League title 3 times, Castle Challenge and Chibuku Super Cups. He led the team twice to the group stages of the CAF Champions League and has won more than 30 caps in the African Safari.

Analysts believe that his mental strength is one of his assets, and his commanding performances have underpinned FC Platinum’s recent success under Norman Mapeza.

He knows that Mapeza is his club football coach, obviously he will select him over e other 2 bhuzas