Illegal To Charge Rentals Only In Forex – Hodzi 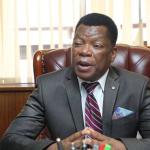 Prosecutor General (PG) Kumbirai Hodzi has warned property owners and managers that they are liable to arrest and prosecution for demanding rentals in foreign currency, without giving tenants an option to pay the equivalent in local currency using the auction rate, saying the practice is tantamount to economic sabotage.

Hodzi said his office has already assigned necessary staff to work in teams with other agencies to clamp down on these practices.

Some landlords, while setting rents in foreign currency, are giving tenants an option of paying in local currency but at exchange rates close to the black-market rates.

Others simply force the tenants to buy foreign currency on the black market and this is in violation of the laws of the country that recognise the Zimbabwe dollar as legal tender. Said Hodzi:

That is economic sabotage. It is a violation of the law. The local currency is legal tender and people must accept it in transactions.

It is illegal to charge rent strictly in foreign currency and the law will take its course. No Government will allow such lawlessness.

The perpetrators must be warned that action will be taken against them. It’s now a rampant problem that is abusive in nature.

Most of the tenants were not reporting their landlords because they don’t want to cause friction.

They are forced to pay under duress but we will come with a legal regime that will bring the lawlessness to an end.

Landlords are trying to force dollarisation through the backdoor. It is causing untold suffering to the tenants because most people are being paid in local currency.

They were taking advantage of the fact that there was no enforcement in the past. Now the prosecution, the police and the courts will enforce the law and deal with the culprits. We will apply the law and effectively prosecute the culprits.

Hodzi added that stakeholders in the fight against illegal foreign currency dealings will meet and come up with an effective strategy of arresting and prosecuting the perpetrators.