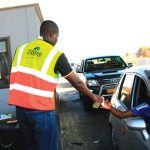 The vendors are reportedly buying foreign currency at black market rates so motorists can use Zimbabwe dollars to pay tollgate fees at official rates.

The majority of motorists will be more than willing to deal with the forex dealers as they will be paying less in local currency than in USD since there is a huge discrepancy between the official rate used by ZINARA and the parallel market rate used by vendors.

ZINARA charges US$2 for light vehicles or ZWL$164 in local currency. Vendors would offer motorists ZWL$164 for just US$1 making it a no-brainer for the latter to take the offer.

As a result, ZINARA is being deprived of thousands of US dollars in potential revenue as the money is being mopped up at tollgates by the vendors as motorists choose to convert their USD to local currency which they then use to pay toll fees.

National police spokesperson Assistant Commissioner Paul Nyathi said vending and money changing at tollgates is against the law and those engaging in such activities will be arrested. He said:

As the police and ZINARA, we have taken a common position that vending and foreign currency dealings at tollgates are illegal.

The police will take all the necessary measures to ensure the illegal vendors are removed from tollgates.

Those who resist will be arrested. We also urged ZINARA officials who are also at toll gates to conscientise the people that vending and money changing are illegal.

Asst Comm Nyathi also warned police officers who dabble in such activities and join money-changers that the long arm of the law will catch up with them.

That's the order of the day kwese kwese.