If Ministers Can't Miss Cabinet, They Must Not Miss Parliament - Komichi 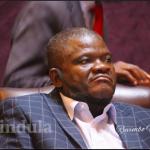 The National Assembly holds its question time on Wednesdays while the Senate holds its own on Thursdays.

However, ministers have been skirting questions from MPs and Senators, prompting the members to push for the session’s adjournment or its complete cancellation from parliament’s calendar. Komichi said last Thursday when just four ministers turned up:

This is quite pathetic and very unfortunate for the people of Zimbabwe. This is one of the serious abuses which the senate can endure. A few days ago, they could just absent themselves without giving any reason.

After the Senate had made a vehement complaint against their behaviour, they have now found a solution and the solution is to simply send an apology. Can these ministers give apologies on Tuesday when there is cabinet, the answer is no because it is planned from the schedule of the year that every Tuesday they go to cabinet.

This means a lot as far as the value and importance of Senate is concerned. This means a lot when we look at ourselves and say why are we here, what are we doing yet the people outside there, the taxpayers and ordinary people expect us to oversee Government activities but here today we have only four ministers. This is quite unfortunate and we have complained for a long time about this behaviour.

On Wednesday, Norton legislator (independent), Temba Mliswa, rose on a point of order to have the Q and A session adjourned the same four ministers had turned up.

cry my beloved country 6 months ago

These guys just want political power which they use to loot.They are so lazy and corrupt thats why they don't attend the Q and A sessions. They don't care abt our country ndivo vatori unpatriotic.

Is it where Borrowed ....gs are Work up you Guys till when Sure TATAMBURA imi Muchiwana Handiti😭😭😭😭😭😭