"I Didn’t Recognise My Team," Says Broos After Bafana's Win Over Warriors 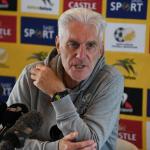 Bafana Bafana coach Hugo Broos says he is not entirely happy with the performance of his players in the win over the Warriors on Thursday night.

South Africa narrowly beat Zimbabwe 1-0 to take a three-point lead at the top of Group G in the FIFA World Cup qualifiers.

Speaking after the match, the 69-year-old Belgian said the Warriors were more aggressive than Bafana and could have taken points from the match. Said Broos:

We played against opponents who were more aggressive than us, who won more duels than us, who had more movements in their team, and I really didn’t recognise my team.

We were a little bit lucky and we could have lost points, but I am happy that we won the match. But, as I said earlier, I am not satisfied with the performance of the players tonight.

…. I don’t have a reason why they played they way they did. I asked Percy [Tau] after the game, ‘what happened?’

Nobody knows it and it was not good. I am not anxious, I am sure that on Sunday there will be a better South Africa.

Bafana will travel to Ghana for their final match against the second-placed Black Stars on Sunday, with qualification for the final stage of the qualifiers in their own hands.

The Zim soccer team should be badly revised and re-establish on proper terms. It's clueless at the present moment

US$4.00 Harare
Muronda Dembare 6 months ago

Very shame to the warriors,I didn't understand the differ btwn Zidrvko and Pasuwa.guys assist me I'm not seeing the difference anymore.it was better to leave Zidravko managing the than a faculty thing we did.

Back to Norman mapeza you must to have a ballminded eye,why you are saying that salt is sugar.You couldnt even emagine the differ btwn the good & the bad

A loss is a loss.

Bafana Bafana coach is not happy with the win over the warriors while Mapeza is happy with our loss,saying he is seeing some improvement.Am l missing something