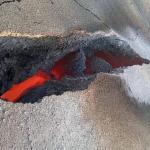 A senior Government official has described the underground coal fires in Hwange as “a ticking atomic bomb” after a picture of a lava-like fire that cracked wide open a tarred road went viral on social media platforms.

George Charamba, the Deputy Chief Secretary-Presidential Communications in the Office of the President, called on Hwange Colliery Company Limited (HCCL) to address the challenge as a matter of urgency. He tweeted:

Major disaster looming. I am told this is right in the middle of the road linking Number Three in Hwange.

This is similar to walking over a ticking atomic bomb. Hwange Colliery Company must act now.

The fires are now a threat to motorists, residents and wild animals, with several people having already suffered permanent injuries after falling into burning pits.

Matabeleland North Provincial Affairs and Devolution minister Richard Moyo told NewsDay that he will engage EMA to carry out investigations so that the problem is addressed.

She said they will soon be releasing a statement for the benefit of the media and citizens.

On November 8 this year, 8-year-old girl Alisha Muzvite suffered serious burns after the ground around her gave way and fell into a raging fire.

She was ferried to Bulawayo’s Mpilo Central Hospital for medical attention but doctors could not save her life despite amputating both her legs.

Hwange Colliery alone cannot solve the problem and @Jamwanda2 knows this. A comprehensive plan is needed in order to avert this disaster. How are other countries doing it,how are their rehabilitation processes? This fire didn't start today,five years ago this same road was diverted coz of the fires and Hwange Colliery probably watered it down. Now that the media got wind about it that's when you want to act. My question now is,where will the residents of number 2,5 &3 be relocated to seeing that the whole of Hwange is surrounded by mines and on the other hand there's a National Park?