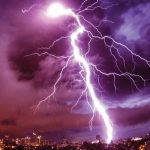 The thirteen (13) inmates from Hwange’s Mbalila Prison who were struck by lightning while they were having lunch in the prison’s courtyard on Friday afternoon have been discharged from the hospital and taken back to their cells.

Nine (9) of the inmates were admitted to St Patricks Hospital in Hwange and four (4) were sent to Bulawayo’s Mpilo Hospital as their condition was critical.

Zimbabwe Prisons and Correctional Services (ZPC) national deputy spokesperson Superintendent Peter Chaparanganda on Tuesday confirmed to VicFallsLive that all the prisoners were back in their cells. He said:

They have all stabilised and are recovering fully from their prison cells.

Some of them who were at St Patrick’s Hospital were discharged on Saturday and the others the following day.

Meanwhile, the Meteorological Services Department (MSD) routinely advises the public to take precautions during thunderstorms. In its latest advisory, the MSD warned that

… lightning is a major risk during this period, When thunder roars, go indoors.

If outdoors, do not shelter under isolated trees or shed. If no shelter is available, try to couch as low as possible with only your toes touching the ground.

Last week on Friday afternoon two learners at Seke 1 High School in Chitungwiza were struck by a bolt of lightning while on their way from the school.