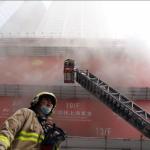 Hundreds of people are trapped in Hong Kong’s World Trade Centre following a fire on Wednesday, according to media reports.

The South China Morning Post said more than 300 people were trapped on the building’s rooftop, and at least four people have been injured.

It said the fire broke out at 12:37 pm local time in an electrical switch room before ripping through the building’s scaffolding.

Citizen News, citing a police officer at the scene, put the number of people trapped on the rooftop at 350 and said another 100 people were waiting to be rescued on a platform on the fifth floor of the building.

The Hong Kong Free Press said the fire is still ongoing and the alarm level has been raised as firefighters try to rescue several people using emergency ladders.

The website said that 150 people have been evacuated from the 38-storey building in Causeway Bay.