Human Remains Found At A Mine In Kitsiyatota 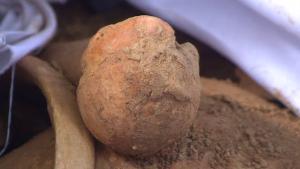 An artisanal miner stumbled upon human remains at the Kitsiyatota mining area in Mashonaland Central Province on Monday.

According to ZBC News, the shaft has being cordoned off after the miner, who was digging for gold, discovered the human remains.

Posting on Twitter, the Zimbabwe Republic Police (ZRP) said the remains were taken to Bindura Hospital for a post-mortem. ZRP said:

ZRP Bindura Central recorded a case in which human remains were discovered at Botha Mine Kitsiyatota.

The bones were unearthed by gold panners and had no flesh. The remains were taken to Bindura Hospital for post-mortem.

In an unrelated development, police in Concession arrested Shame Nyamhande (40) in connection with a case of unlawful entry which occurred at Whitecliff Farm on 23 December last year.

Nyamhande was also found in possession of two pairs of handcuffs and a pair of leg irons. The suspect is also linked to other Unlawful Entry cases at ZRP Shamva and Chiwaridzo.