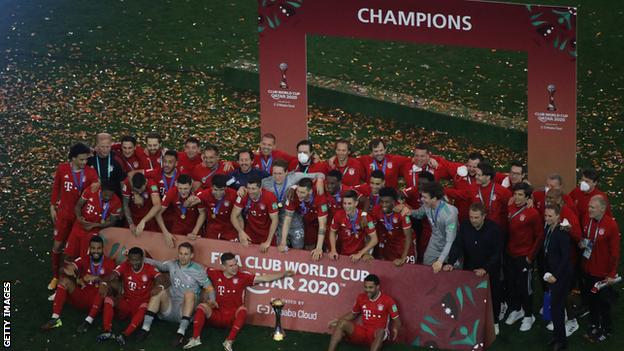 The 2021 Fifa Club World Cup, featuring the champions of different continents, kicks off on Thursday in the United Arab Emirates.

European champions Chelsea are among seven teams from six confederations competing to become the club world champions in Abu Dhabi.

The annual event was due to take place in December 2021 before Japan, the original hosts, pulled out in September because of Covid-19 restrictions in the country.

Fifa has been criticised for rescheduling the 18th edition of the Club World Cup while the Africa Cup of Nations is taking place.

Where can I watch the Fifa Club World Cup?

Channel 4 have the UK terrestrial TV rights to the Fifa Club World Cup.

Chelsea's semi-final on Wednesday, 9 February will be on E4 and if the Blues reach the final on Saturday, 12 February the game will be shown on Channel 4 - both games kick-off at 16:30 GMT.

What's the format and when are the games?

Two teams will compete in the first round on Thursday - Tahiti's AS Pirae and Al Jazira from host nation the United Arab Emirates - with the winners advancing to the second round.

Pirae, who are representing the Oceania Football Confederation, are making their debut at the tournament. Al Jazira, who are managed by former Ajax boss Marcel Keizer, are the 2020-21 UAE Pro League champions.

The winners will go through to the second round which features Egypt's Al Ahly, who are competing in the Club World Cup for the seventh time.

The two second-round winners will advance to the semi-finals where European champions Chelsea and South American champions Palmeiras enter.

The final is on 12 February and takes place after the third-place play-off earlier in the day.

How has Covid impacted the tournament?

While Japan hosted both the Olympic and Paralympic Games last summer, it pulled out of hosting the Club World Cup as it grappled with its worst Covid wave.

The 2021 event was set to be the ninth time the tournament had been hosted in Japan, and would have coincided with the Japanese Football Association's (JFA) 100th anniversary celebrations.

Fifa confirmed in November the tournament would be held in the United Arab Emirates instead.

Auckland City were originally due to represent the Oceania Football Confederation but withdrew in December because of the pandemic and their spot was handed to AS Pirae.

Where are the venues?

The United Arab Emirates is hosting the tournament for the fifth time. Only Japan - eight times - has hosted it more.

All eight matches - there is also a fifth-place play-off on 9 February - are in Abu Dhabi at two venues.

The Mohammed bin Zayed Stadium - which has a 37,500 capacity - is staging four games including Chelsea's semi-final and the final.

The other venue is the 15,000 capacity Al Nahyan Stadium.

Are Chelsea taking it seriously?

Absolutely. Only two English clubs have won the tournament in the previous 17 editions - Manchester United in 2008 in Japan and Liverpool in 2019 in Qatar.

Chelsea were finalists in 2012 when Rafael Benitez's side lost 1-0 to Brazilian club Corinthians in Japan.

Cesar Azpilicueta is the only player still at the club who featured in the final in Yokohama 10 years ago.

Chelsea are competing for trophies on five fronts after reaching the Carabao Cup final, which takes place on 27 February, 15 days after the Club World Cup final.

They are third in the Premier League - 10 points behind leaders Manchester City with 14 games left - in the fourth round of the FA Cupand face French champions Lille in the last 16 of the Champions League over two legs on 22 February at Stamford Bridge and 16 March in France.

Blues boss Thomas Tuchel has previously said he will not prioritise any competition.

Asked in December about sacrificing the Carabao Cup for the Club World Cup, he added: "We will never do this because if we think we need to rest players or give players a chance to play, like it's a tradition in the Carabao Cup, then we will do it - but we will always prepare to win the match.

"This is the spirit we have to keep going.

"It is a struggle, of course it is a struggle and it feels very demanding, I can assure you of that. For everybody, the staff and the players, but we will push through and pursue it, there is no other option.

"So no, we don't start judging games and the value for those games."

Chelsea's participation means Premier League games against Brighton and Arsenal - on 8 and 12 February respectively - have been postponed.

A European side has won the past eight editions of the tournament.

Bayern Munich are the current Club World Cup champions after beating Mexico's Tigres in the 2020 edition of the final played in Qatar in February 2021.

However, they cannot win it this time after going out of last season's Champions League at the quarter-final stage.

The last team outside Europe to win it were Brazilian side Corinthians, overcoming Chelsea in the 2012 final.

None of the teams in the 2021 edition have won the competition.

Like Chelsea, Palmeiras are taking part for only the second time.

I wish my favorite team ALL THE BEST. BRING THAT TROPHY HOME BOYS. #KTBFFH💙