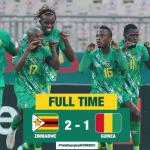 Mahachi, horses in English, made it 2-0 after skipper Knowledge Musona had scored the opener.

The match ended 2-1 after Liverpool forward, Naby Keita pulled one for the Syli Nationale which is Susu for “National Elephants.” Watch the video below for more:

The match did not guarantee Zimbabwe’s stay at the tournament after losing the first two matches of the group stage.