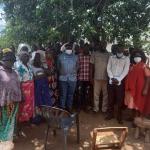 The High Court Court has dismissed an application filed by villagers from Chilonga Communal lands, Chiredzi, Masvingo, which sought to challenge the government’s plans to evict them from their ancestral lands.

The villagers were challenging Sections 4 and 6 of the Communal Lands Act which vests rural land in the President which they argued was a colonial relic premised on a racist concept that an African could not own land.

The villagers also argued that the Communal Lands Act is a racist and a colonial creature which regards Africans as too uncivilised as to own land.

The villagers queried how an African can own a house in Harare’s plush suburb of Borrowdale but cannot own his ancestral home in areas such as Chiredzi, Mwenezi, Dotito, Chendambuya, Nkayi or Tsholotsho.

The evictions are meant to pave way for a commercial irrigation venture.

Chilonga villagers were being represented by MDC Alliance Vice President, Tendai Biti who is a Zimbabwe Lawyers for Human Rights member.

In March 2021, Chiredzi Rural District Council (RDC) chairman Mr Aldermen Edward Matsilele said contrary to reports in the media, “no one living in the Chilonga area will be displaced, only a few might need their houses shifted a short distance to allow irrigation canals to pass through.”

He added that local headmen, chiefs and councillors are being consulted so that their people get to understand what is being planned.

The government initially issued a Statutory Instrument that indicated that the state intended to take the land and evict the people to a land that had already been identified.

The tone in the latest Statutory Instrument even suggests that the government will compensate some villagers who would have been affected by the “irrigation project.”