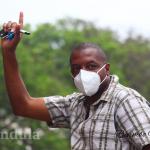 Chin’ono was arrested in July 2020 on charges of incitement to commit public violence through posting tweets denouncing looting and corruption by well-connected political elites and their cronies.

According to the Zimbabwe Lawyers for Human Rights, Justice Musithu ruled that the charges lack essential elements and particulars as may be reasonably sufficient to inform Chin’ono of the nature of the charges he faces.

The judge said the contradiction in the charge sheet and State outline left Chin’ono unsure about the offence which he is alleged to have committed.

Justice Musithu concluded that the State was on a fishing expedition when it arrested and prosecuted Chin’ono as charges preferred against him lacked the required particulars.

Posting on Twitter after his acquittal, Chin’ono paid tribute to his lawyers Beatrice Mtetwa, Douglas Coltart and Gift Mtisi. He said:

I would like to thank Beatrice Mtetwa, [Doug Coltart] and Gift Mtisi for representing me successfully and being there for me.

I would also want to thank the Zimbabwe Lawyers for Human Rights], their director [Roselyn Hanzi] and everyone who stood with me during my political persecution.

Congrats,that guy suffered a lot during that time

Congrats.Daddy Hope is my heroe

At the time of his arrest there was no strict and clear law on the alleged offence. Now that the Data Protection Act was signed, and it clear states that inciting violence using these social networks is an offence, if you are to do it now you can surely face 7yrs in jail.

FROM THE BEGINNING IT WAS CLEAR EVEN TO US BUSH LAWYERS THAT CAMARADA CHIN'ONO HAD NOT COMMITED ANY CRIME.

CAMARADA HOPEWELL CHIN'ONO PUBLISHED STORIES OF LOOTING AND CORRUPTION BY SENIOR GOVERNMENT OFFICIALS. CHIN'ONO BELIEVED IN THE STRENGTHS AND TRUTHFULNESS OF HIS STORIES.

AB INITIO [FROM THE BEGINNING], IT WAS AN UNPROSECUTABLE CRIME. THESE ARE THE CASES WHERE PROSECUTORS ARE FORCED TROUGH THEIR THROATS BY GULLIBLE POLITICIANS TO PROSECUTE CASES WHICH DO NOT HAVE EVIDENCE.

IT WAS CLEAR THAT WHOEVER PROSECUTED NEEDED TO ESTABLISH NEXUS [CONNECTION] BETWEEN CHIN'ONO'S STORIES AND THE DEMONSTRATIONS WHICH HAD BEEN PLANNED BY MDC ALLIANCE, JACOB NGARIBVUME AND DEMOCRACY ACTIVISTS. IT WAS GOING TO BE DEMN DIFFICULT.

THE BUSH LAWYER IS HAPPY WITH HIGH COURT JUDGEMENTS COMING FROM OUR HIGH COURT SINCE THE NOISE ABOUT THE EXTENSION OF CHIEF JUSTICE MALABA'S SERVICE. I FEEL THAT JUDGES NO LONGER SEND THEIR CASES TO THE CHIEF JUSTICE BEFORE THEY READ THEM IN COURT.

FRO THE PEOPLE, FOR THE COUNTRY, FOR THE LAW.

Congratulations for your acquittal. Hope.