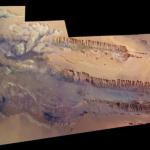 The Trace Gas Orbiter (TGO) hovering above Mars has found significant amounts of water at the heart of Mars’ dramatic canyon system.

The water, spotted in Valles Marineris, is hidden beneath Mars’ surface.

The hidden reservoir is about the size of over 45 000 square kilometres.

The new discovery provides another location for astronomers to look for water apart from the polar regions on the planet, where water is found as ice.

The spacecraft was mapping the hydrogen a measure of water content in the uppermost metre of Mars’ soil when it came across the chemical remnants.

Water ice has not been found on the Martian equator due to extreme temperatures making it not cold enough for exposed water ice to be stable.

The orbiter hunted for near-surface water as ice covering dust grains in the soil, or locked up in minerals at lower latitudes of Mars, and found small amounts. Igor Mitrofanov of the Space Research Institute of the Russian Academy of Sciences in Moscow said in a statement:

With TGO we can look down to one metre below this dusty layer and see what’s really going on below Mars’ surface and, crucially, locate water-rich ‘oases’ that couldn’t be detected with previous instruments.

The discovery was made by the Fine Resolution Epithermal Neutron Detector (FREND) telescope onboard the spacecraft. It revealed an area with an unusually large amount of hydrogen in the colossal Valles Marineris canyon system.

The European Space Agency on Wednesday said that the water-rich area is about the size of the Netherlands and overlaps with the deep valleys of Candor Chaos.

With mission planning to land in the lower latitudes on Mars, locating such a reserve of water on the planet could be highly beneficial for future missions.

great news indeed maybe veCCC can form their gvt there

Yaa myb we can reduce population pressure on Earth...