Here Is Why SA Won't Replace Zimbabwe At 2021 AFCON 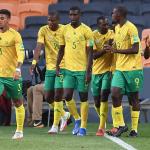 The South African Football Association (SAFA) says Bafana Bafana will not qualify for the belated 2021 Africa Cup of Nations (AFCON) finals even if Zimbabwe is disqualified.

Zimbabwe faces a possible ban from the tournament unless the Sports and Recreation Commission (SRC) reverses its suspension of the Zimbabwe Football Association (ZIFA) board.

FIFA this week warned Zimbabwe, on the eve of the AFCON finals in Cameroon from 9 January to 6 February that the Warriors may face a ban unless ZIFA’s elected leadership regains full control.

The development sparked speculation in South Africa, especially on social media, that if Zimbabwe is disqualified, then Bafana Bafana will take their slot at AFCON.

South Africa finished third in their qualifying Group and were the best third-positioned finisher in all 12 groups on 10 points.

However, the Confederation of African Football (CAF) ruling is that should a team withdraw between qualifying for the Nations Cup and the start of the tournament, their four-team group become reduced to three.

There is no replacement from outside for the team that will have been disqualified.

SAFA chief executive officer Tebogo Motlanthe confirmed that, even if Zimbabwe fails to resolve their issues and are banned, there would be no path for South Africa to qualify. Said Motlanthe:

First of all, I would say don’t get ahead of yourself because Zimbabwe might still resolve their issues.

But, yes, you are reading the rule correctly, so even if Zimbabwe were banned there would be no path for Bafana to still qualify.

I think people were just getting excited because CAF sometimes has the format in qualifying where the best runner-up or third-place team sometimes can qualify.

Article 86 of the regulations for the 2021 Nations Cup states:

If a team withdraws after its qualification in the final tournament, but before its actual start, it shall be replaced by the team classified next in the group of the team in question.

In default, the group to which belongs the forfeiting team shall be composed of three teams.

This means that if Zimbabwe is expelled from the 2021 AFCON finals, Guinea, currently the third-ranked side in Group B, would move up to occupy Zimbabwe’s current second ranking.

Group B would then become a three-team contest, involving top-ranked Senegal, Guinea in second and Malawi, who would move up from fourth to third.

No turning back SRC! Soldier on!!!! Make everything correct at once!

ZIFA is shit i agree but the timing of the suspension was very stupod. This Gerald Mlotshwa who is also Mnangagwa's son in law is an arrogant poce of rubbish. Zimbabwe will be banned.