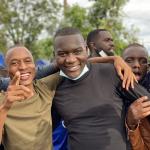 Prominent MDC Alliance activist Makomborero Haruzivishe has vowed to continue fighting against civil and political injustice even in the face of State persecution.

Haruzivishe was granted bail by the High Court on Friday and released from prison on Saturday after spending ten months and 22 days behind bars on several criminal charges.

Addressing party supporters and activists who had come to welcome him from prison on Saturday, Haruzivishe said:

As long as they continue charging us on flimsy charges we will not be deterred and prison is just prison, people go in and go out and even if it means that I will go back again I will as long as we get our rights and freedoms.

We know that it is not an easy road and great sacrifices will be made, others have made bigger sacrifices, others have paid the ultimate price, we can talk of Itai Dzamara and all those victims of the ferret.

The charges I got in here for our constitutionally guaranteed freedom of assembly and freedom of expression and they try to criminalize that, it is awkward but only serves to strengthen me more that they wanted to scare me away and we are the people in charge and victory is certain.

State capture is a reality, getting into prison for this prolonged period enabled me to see that we have a bigger fight than what we imagined especially within our justice system we have a bigger fight, and we have to pull up our socks and be more radical in terms of educating the masses for them to know the problem that we have which chiefly emanates from military capture.

EVERY WAR IS NOT WON ON A SILVER PLATTER. WE CAN GET TESTIMONIALS FROM OUR ESTEEMED ZANLA AND ZIPRA CADRES.

THEY EXECUTED THE WAR OF LIBERATION UNTIL THEY REACHED MANRESA, {HARARE} WHERE THEY MISSED IAN DOUGLAS SMITH BY 30 MINUTES, BUT HIT FUEL TANKS IN THE HEAVY INDUSTRIAL SITE.

MOKOMBORERO HARUZIVISHE, YOU ARE IN A LAWFUL STRUGGLE WHERE YOU SEEK JUSTICE. I AM HAPPY THAT YOU HAVE COMMITTED YOURSELF TO THE STRUGGLE FOR JUSTICE. YOU WILL WIN. TODAY THEY ARE PERSECUTING, PROSECUTING AND CALLING YOU NAMES. TOMORROW THEY SHALL BOOT LEAK YOU IN SEARCH OF FAVOURS AND FORGIVENESS.

{FORGIVE THEM FOR THEY DO NOT KNOW WHAT THEY ARE DOING }.