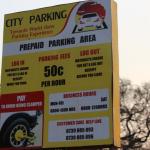 The Zimbabwe National Organisation of Associations and Residents Trusts (ZNOART) has suggested possible solutions to the problem of traffic congestion in Harare.

ZNOART proposed three possible solutions to the problem namely, hiking parking fees in the Central Business District (CBD), erecting toll gates on all of Harare’s feeder roads, and redesigning the roads into the CBD. ZNOART said:

Harare should either hike parking fees in the CBD. Whoever can afford will drive through town and those who can’t afford will park in the Avenues, Mbudzi, Ruwa, Norton or commute into town.

Put tollgates into roads leading into Harare CBD. One of two things will happen; either the volume of traffic will go down or the City of Harare will raise so much money. Potholes will be a distant memory if the money is put to good use.

Redesigning the roads into the CBD. Here we are now talking about a move away from the grid-lock design to overpasses and offramps together with skywalks and sky-driveways.

This will be a major structural overhaul that will create loads of jobs.

Traffic congestion has become a huge problem in Harare and the situation deteriorates even further when it is raining.

On Friday last week, Harare City Council issued a travel advisory to motorists advising them to avoid travelling through the CBD, if possible, due to massive congestion.

In October, the Government said it will implement measures to deal with congestion, among them repair of street lights along major trunk roads, repair and upgrading of traffic lights and signals at major junctions, as well as installation of new traffic signals.

People Of Various Opinions 4 months ago

ZNOART...wat a name?!...anyway...2 of your suggestions are just an excuse to extort us more which l think is bullsh*t.....let those responsible do the work we elected them to do e.g the mayor...why not fight for that

The solution is not to toll the already burdened citizens who rely on getting into town to make a living .The solution is to complete and upgrade Harare Drive which is a ring road that is supposed to divert through traffic around the city The solution lies in doing actual work which by the way has actually been planned for in anticipation of exactly the problems we have now.upgrade roads