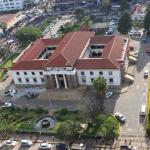 Harare councillors want residents who built houses on stands acquired illegally to pay as much as US$10 000 for the regularisation of their stands as a deterrence measure.

The amounts will, however, differ with those who built houses in low-density areas paying more than those in medium-density and high-density areas respectively.

Residents in low-density areas will fork out US$10 000, medium density US$6 000 and high density, US$2 000 to have their houses regularised.

The proposal was made by Councillors during a recent full council meeting.

The proposal was shot down by Councillors, who instead, proposed the fees to be US$2 000, US$6 000 and US$10 000 or their ZWL equivalent on the date of payment for high density, medium density and low density, respectively.

The Councillors asserted that houses built on institutional sites reserved for schools, clinics and libraries, as well as on wetlands will also not be regularised.

So, in other words we are saying it's fine to continue disturbing the wetlands. And with corruption brewing in the council, who will manage those funds, if they are to be paid and who is going to benefit from that

... In other words they are saying its split milk... You cant unbuild on wetland and undo the damage... Best they can do is fine them... Do you have any other solutions nhai sadney