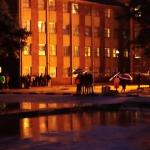 Students at Harare Polytechnic were early this week ordered, without prior notice, to move out of hostels so that they undergo renovations.

On Monday and Tuesday this week, more than 150 students were told to move out of Block F, forcing some of them to sleep in the corridors.

Some students who spoke to Pindula News criticised authorities at the institution for carrying out the renovations while students were writing their end of year examinations. One of the students said:

Authorities did not inform students beforehand that they will be renovating the hostels.

We have a new Dean of students, Mr Mudoti, and four days before the college reopened for examinations, he informed students to pay up fees including accommodation.  He, however, did not tell them that Block F will be closed for renovations.

Had he advised students of the planned renovations, they would have looked for alternative accommodation, in spite of the fact that rentals in Harare are extremely high.

Can you imagine someone travelling all the way from Victoria Falls and then being kicked out of the hostel without notice, in the cold and rain?

Unions representing students, that is, the Zimbabwe National Students Union (ZINASU) and Zimbabwe Congress of Student Union (ZICOSU) raised the issue with the dean and the principal.

According to some students at Harare Poly, ZINASU is currently engaging authorities over tuition fees that were raised without notice.

Harare Poly is reportedly demanding fees for the first term (2022), yet students are still writing 2021 examinations and the 2022 academic year is yet to commence.

ZICOSU, which is thought to be cosy with the Government, engaged the principal Tafadzwa Mudondo over the issue of student accommodation but no immediate solution could be found.

Meanwhile, students were planning to stage a protest over the issue but one of the leaders was reportedly arrested by the police.

Logically this does not tally, the report is exaggerated. Thus my opinion, the reporter should have gone and witness the scenario so as to report firsthand🤷

So sad, that school is notorious for ineptitude & just incompetence nje!!.... Shame shame to the school authorities there.....how can a school still be operating with 3 decades old way of doing business... In 2021