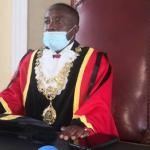 This is the fourth time that Moyo has suspended Mafume, and in all instances, he has done so without convening a disciplinary hearing.

Mafume returned to work two weeks ago after the expiry of his third suspension.

I have reasonable grounds for suspecting that you councillor Jacob Mafume has committed acts of gross misconduct, gross incompetence and willful violation of the law as referenced in subsection (1)(b)(c) and (e) and hereby suspend you with immediate effect.

Speaking to NewsDay on Wednesday, Mafume described the latest decision by Moyo to suspend him as childish. He said:

That is childish, no wonder we can’t deliver as councils, they are suspending mayors willy-nilly.

The Act allows the loser of the last election to supervise the winner, in this case, we beat ZANU PF in council elections but because they stole the presidential elections they are now supervising us using the Urban Councils Act.

This is so childish they are throwing toys and the baby out of the pram.

A few days before his latest suspension, Mafume wrote to the mayor, Stewart Mutizwa (MDC-T) and the town clerk Phakamile Moyo, accusing them of failing to respect the law on his return to office.