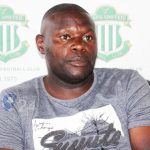 Harare City Football Club coach Lloyd Chitembwe has refused to lament the absence of some key players due to suspension for their do-or-die Chibuku Super Cup Group 1 clash against high-flying Dynamos at Baobab Stadium on Sunday.

The Sunshine Boys will be without the influential trio of captain Marshal Machazane, Ben Musaka and Tatenda Tawengwa, but Chitembwe is not worried.

Tawengwa was shown a red card in the last match, a 3-0 defeat by Herentals, while Machazane and Musaka have both accumulated five yellow cards.

Asked about the effect how the trio’s absence will have on his team’s performance tomorrow, Chitembwe said:

It is not a problem at all. This is why we are in football and these are some of the challenges that we are faced with but we have to overcome.

This is a chance to give others who have not been playing a chance and see how they react.

They have to capitalise on this opportunity and it’s a good thing because they might give a different dimension to how we have been doing things.

Harare City needs a positive result to have a chance of progressing to the quarterfinals of the competition.

Dynamos who are the Group 1 pacesetters have already qualified for the next round and Harare City and ZPC Kariba, who face Caps United at the National Sports Stadium tomorrow, are fighting for one remaining slot in the last eight.

The two matches kick off simultaneously at 11 am.

With 13 points, two clear of ZPC Kariba, it is in City’s hands as they just have to equal or better the result in Harare to go through to the last eight, where Cranborne Bullets lie in wait.