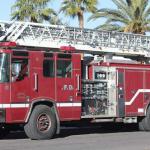 Harare City Council has been struggling to raise 68 000 pounds for shipment of donated fire engines from a United Kingdom-based capacity building firm.

The city has been under fire for being unable to respond to emergencies due to its depleted fleet of fire tenders and ambulances.

Harare Metropolitan’s Provincial Development Coordinator, Mr Tafadzwa Muguti said there was a need for the city to pull up its socks.

Mr Muguti said this in his half-year report for the Metropolitan city covering Harare City Council, Chitungwiza Municipality, Ruwa and Epworth Local board that was made available recently. Muguti said:

However, the city’s acting corporate communications manager, Mr Innocent Ruwende refuted the claims saying they paid the shipment costs, but they were yet to take delivery. He said:

We paid the money last year some of the associated materials are arriving this week while we are expecting four fire tenders to arrive at Walvis Bay in the next two weeks.

The city has only four fire stations against a requirement of 10 sites. Mr Muguti said Government was equally concerned by the lack of substantive persons in many senior positions within the city saying the entire directorate and senior management of the Harare City Council are in acting positions.

Muguti said this is due to the suspension, arrest and remand of directors and senior management officials.

Muguti also said Chitungwiza was facing serious challenges in the provision of goods and services.

Emergency for emergency.What is the problem now.What are we waiting for?