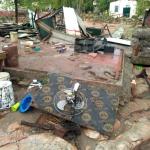 Dozens of families were left homes and soaking in Hwange’s Ngumija suburb on Monday after a hailstorm damaged their houses.

Over 30 houses had their roofs blown off while two of them were reduced to rubble following the violent hailstorm.

Six people were hurt and ferried to St Patrick’s Hospital for treatment.

The storm also damaged two houses under the Hwange Colliery Company Limited Concession area under Ward 14 but there were no injuries.

One of the affected residents who spoke to CITE but declined to be identified said it was through divine intervention that there were no lives lost as the winds were extremely violent. Said the resident:

We have God to thank for sparing our lives as the winds blew away roofs and fell trees on top of some of the houses.

The wind was very strong and given that these houses are old and not properly reinforced because of the nature of materials used it was easier for the roofs to be blown away.

Most people lost property worth hundreds of dollars, especially electrical appliances, while some are now homeless.

Another resident, Tinashe Matika, said their efforts to have the National Railways of Zimbabwe (NRZ) renovate its prefabricated housing units have hitherto been futile. Said Matika:

The prefabricated housing units collapsed due to the rains but the main issue is these units are old and dilapidated.

Last year but one and last year we tried to engage the NRZ to conduct maintenance on the properties but they would have none of it, all they wanted was their rentals and no concern was given to the quality of the lodgings.

Yesterday a series of them caved in due to the rains, a few other units (not in the prefab section that collapsed) also had their roofs blown away. I am told an individual was hurt by one of the rooftops, it cut his head.

Ward councillor Vincent Sibanda confirmed the development but said he was still to ascertain the true extent of the damage. He said:

Yes, I can confirm that some houses in my ward were destroyed by rain and strong winds during the torrential rains that fell on Monday.

I’m still trying to get the exact details but over 30 houses had their roofs blown off and two of them were totally destroyed.

Meanwhile, it is understood that the officials from the District Civil Protection Unit visited the affected areas to assess the damage while alternative accommodation was being sourced for the most affected.