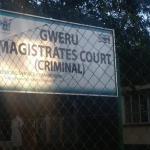 A Gweru vendor who killed his wife and two children on Tuesday collapsed and died this Thursday before he could answer to murder charges at the Gweru Provincial Magistrate Courts.

Leo Kanyimo (38) allegedly went into a trance on Tuesday afternoon and axed his wife and two children to death.

Reports suggest that police officers had to be assisted by members of the public to arrest Kanyimo who had just turned violent while speaking in an unknown language.

Midlands provincial prosecutor Samuel Pedzisayi confirmed the death of Kanyimo while he was in the Zimbabwe Prisons and Correctional Services holding cells. Said Pedzisayi:

The murder accused from Woodlands suburb Leo Kanyimo collapsed and died while in prison holding cells.

He had been brought to court by the police and because of his extreme violent nature, he was put in the holding cells while his record was being opened.

Meanwhile, The Mirror reported sources as saying that Kanyimo (38) who was an ardent AFM member, had an altercation with his wife Chipo Shava (30) over a US$1 that the latter allegedly used to buy jiggies for the kids resulting in a misunderstanding.

In anger, Kanyimo bludgeoned his wife and two children to death using a log.

The cause of Kanyimo’s sudden death is yet to be established but a report claims that he had a scar on the head which he sustained when neighbours mobbed up and restrained him before tying him up with ropes.

More: The Herald; The Mirror

This appears to be a clear case of mob justice. They wanted him to taste his own medicine. Mina vele uma lami bengimthole egalula emanzini bebgimtshiya enjalo.

The cause of Kanyimo’s sudden death is yet to be established but a report claims that he had a scar on the head which he sustained when neighbours mobbed up and restrained him before tying him up with ropes.