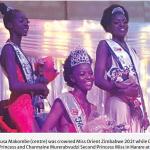 28-year-old Bio-Science teacher Samukelisumusa Makombe was crowned inaugural Miss Orient Zimbabwe 2021 over the weekend beating nine other contestants at a ceremony held at Zimbabwe College of Music in Harare.

The Gweru queen walked away with hampers courtesy of various sponsors and cash prize amounting to $200 while the first princess went to Chiedza Mawere of Harare.

Both princesses pocketed $100 and hampers.

Makombe, who was the crowd’s favourite from the start each time she goes on ramp, sailed well during the question and answer segment.

Asked, in line with the pageant’s theme, how would you empower the marginalized rural girl, Makombe said:

First I would empower the girl child by engaging them in my already running campaign and project of teaching young girls to believe in themselves, understand the importance of education and abuse among others.

I am also working on the issue of early child marriages which is also rampant especially where I come from. I am a teacher at Nashville High and this has helped me understand the girl child more as I am much involved with them.

Makombe said she was not new to pageantry as she once took part in the Miss NUST 2017 and was crowned Miss Personality.

The Miss Orient Zimbabwe ran under the theme, “Catwalk to empower marginalised rural girl child” in a bid to promote and give the girl child, especially those in the marginalised, a chance to showcase their talent.

It was a brainchild of Wendy Mapindu who said somehow the girls in such areas seem to be neglected.