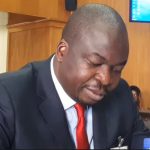 The permanent secretary in the Ministry of Finance and Economic Development, George Guvamatanga, has been appointed to the board of the Eastern and Southern African Trade and Development Bank Group (TDB Group) as a non-executive director.

This was announced by Finance Minister Mthuli Ncube in a statement on Wednesday night. He confirmed that Guvamatanga’s appointment to TDB Group had been approved by President Emmerson Mnangagwa. Said Ncube:

The appointment, which is for an initial period of three years, is with effect from 1st October 2021 and covers Botswana, Eritrea, Mauritius, Rwanda and Zimbabwe.

Established in 1985, the Eastern and Southern African Trade and Development Bank (TDB), formerly the Preferential Trade Area Bank (PTA) Bank, is a multilateral, treaty-based development financial institution, with assets of over US$5 billion.

In the past five years, TDB’s shareholder base has grown from 19 to 35 members, including 22 members from across COMESA, EAC and SADC, 2 Non-African member countries and 11 institutional investors.