Govt To Maintain 'No Work, No Pay' Policy As Teachers Plan Job Action 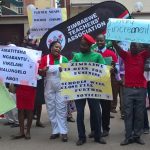 Teachers unions are planning to go on strike as soon as President Emmerson Mnangagwa announces the date for the re-opening of schools, which remain closed indefinitely.

Teachers say their Zimbabwe dollar salaries have been eroded by inflation and they want the Government to pay them in foreign currency.

Educators Union of Zimbabwe president Tafadzwa Munodawafa told NewsDay that they hope the Government announces the date for the reopening of schools after they receive their January salaries. He said:

We all know that the government knows that the peanuts paid to us on the 17th of December as bonuses have been long eroded, and it is hoped that if the opening date is announced after the January payday, teachers will then get bus fares to their work stations.

The solution as we get into 2022 would be to get a dignified component of remuneration in US dollars.

Many educators will fail to report for duty as schools re-open because of salaries that are below the poverty datum line.

However, the Acting Minister for Primary and Secondary Education Paul Mavima on Monday warned teachers that if they decide to go on strike, the Government will maintain its “No Work, No Pay” policy. Said Mavima:

It doesn’t matter when schools will open, even if schools open tomorrow or at a later date, we expect all teachers to go back to work and report for duty.

As government, we will maintain the stance that if you don’t come to work, you don’t get paid.

The National Joint Negotiating Council (NJNC) is dealing with the issue of conditions of services for all civil servants.

The process of talking to each other must be respected. We do not want a situation whereby one or two teachers’ unions wants to disrupt the system. We will not allow that to happen.

Secretary to the Public Service Commission (PSC), Jonathan Wutawunashe reminded teachers of the proper channels to air their grievances. He said:

In the NJNC all civil servants regardless of sector, are represented by the Apex Council which is a federation of public sector unions that include teachers’ unions.

The PSC must respect its own processes and make sure that the law is respected. The NJNC has since run its race and must be replaced as soon as possible. The NJNC is now moribund and must be buried. The new republic must walk the talk.

No work no pay for all Ministers, coz noone is delivering anything.

And how is that going to solve anything?

@Shadows that head of yours is full of water mmnxmm

The teacher are expressing genuine greviences representing all civil servants who are just silent and afraid to express themselves, the police and army will tell u they are not allowed to complain and they pin their hopes on teachers' voices and industrial actions. But malcontents like @Shadows will think that its only teachers who are not happy about the salary, there is no more salary for public servants, only ministers and their friends talk of real salary thats why they are quick to scream no work no pay to please their masters and enjoy the benefits of suppressing other pple.