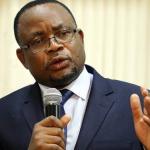 The government has expressed concern over the increase in prices of goods and services which is eroding civil servants’ salaries due to the use of black-market forex rates by businesses.

Some businesses are using rates as high as $200 for US$1, while the official rate is at $90.07 for US$1, which only a few are buying from a selected bureau de changes.

In an interview with State media on Tuesday, Public Service and Social Welfare Minister Paul Mavima said the Government is very sincere about the welfare of its employees.

He said the government has increased civil servants’ salaries twice amounting to a combined 75 per cent increment, but the gains have been eroded by the ever-increasing prices of basic commodities. Said Mavima:

As soon as the Government increases their salaries, the salaries are eroded by increasing prices. There is therefore a need for a concerted effort at stabilising prices.

He implored civil servants to be patient with the Government, saying the National Joint Negotiation Council (NJNC) is due to meet soon for the next round of negotiations on salaries.

We have asked the Government to convene a meeting to map a way forward. We need to address the salary challenges we are facing as civil servants.

We need our salaries cushioned. We are in dire need of Government’s timeous intervention and that is why we are calling for a meeting because things are getting out of hand.

Yes from April to July civil servants got a salary increase of 25 per cent and in July they got a 50 per cent salary increase, but that is now peanuts because of the surge in prices of goods and commodities.