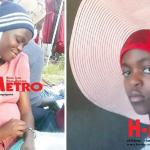 The Government has opposed a High Court application filed by child rights activists seeking to compel the Johane Marange Apostolic Church to launch a campaign against child marriages within the sect.

The application was filed by Masvingo resident Sharon Moffat, Legal Resource Foundation and Women’s Coalition of Zimbabwe early this month.

The applicants stated that they wanted the Marange Apostolic Church and the Apostolic Churches Council to display anti-child marriage messages at every place of worship or shrine for 19 consecutive weeks.

In their plea, the government ministers opposed the application describing it as unnecessary, further stating that they had taken all the necessary steps required at law to curb child marriages. They said:

Defendants plead that all the legislative and other steps required at law have been taken to stop child marriages and enforcement of the same is being taken as occasions require.

Accordingly, defendants submit that the relief sought here against either some or all of them is misplaced, unnecessary and incompetent and should be denied by this honourable court.

The applicants want the Marange Apostolic Church of St Johane and the Apostolic Churches Council, to display a message stating that the marrying off and marrying of young girls is not part of their sects’ doctrines, and hence should not take place in the name of religion.

The matter is yet to be heard.

marrying under age is disallowed in church and has been on agenda for a long time , make an enquiry. our church is principled