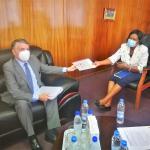 The Government is seriously considering introducing Spanish as an optional language in public schools.

This was revealed by the Ministry of Primary and Secondary Education after the Spanish ambassador to Zimbabwe His Excellency Santiago Gomez-Acebo made a courtesy call on Minister Evelyn Ndlovu and her deputy, Edgar Moyo.

Posting on the official Twitter page, the Ministry of Primary and Secondary Education said:

The Ambassador of Spain His Excellency Santiago Gomez-Acebo paid a courtesy call to Hon. Dr Ndlovu and her deputy Hon. Moyo to lobby for Spanish as an optional language for primary and secondary education so as to create an opportunity to do business with 700 million people.

In an interview with CITE, Director of Communications and Advocacy in the Ministry of Primary and Secondary Education, Taungana Ndoro, confirmed there was a high possibility Spanish could be adopted in public schools, as an optional language.

Ndoro conceded that for that to be achievable, Zimbabwe would need to produce teachers who can teach Spanish in public schools. Said Ndoro:

The possibility of this happening is very high. In some of our private schools, you would find that Spanish is already being offered as an optional language.

But the proposal here from the (Spain) ambassador was to request for our public and government schools to also offer Spanish as an optional language.

I FULLY SUPPORT THOSE WHO SAY LET US FIRST OF ALL INTRODUCE NDEBELE LANGUAGE IN MASHONALAND PROVINCES AND CHISHONA LANGUAGE IN MATABELELAND PROVINCES BEFORE WE LOOK OUT FOR AN OPTIONAL LANGUAGE TO INTRODUCE TO OUR FORMAL EDUCATION. I AM AWARE THAT FOR YEARS NOW OUR MINISTRY OF SECONDARY AND PRIMARY EDUCATION HAS BEEN TRYING TO INTRODUCE THESE THESE SUBJECTS, BUT THE STUMBLING BLOCK HAS BEEN LACK OF COMPETENT TEACHERS.

COUNTRIES WHICH SPEAK SPANISH ARE FOUND IN SOUTH AMERICA. IF WE WANT TO INTRODUCE ANY OTHER LANGUAGE AS OPTIONAL, I RECOMMEND THAT WE INTRODUCE FRENCH BECAUSE IT IS SPOKEN IN MOST NORTH AFRICAN COUNTRIES.

Ingawani zvanzi it will be optional.... Noone can be forced to speak any language even shona or ndebele yacho

Why learn spanish when some of us can't speak shona. Introduce Ndebele in Mashonaland and Zezuru or Karanga or Ndau or Manyika in Matebeleland, why is that people would rather learn a foreign language than a different local language

Umbono yiwo boss. Some of us are privileged to have grown up in places where all these languages are spoken. I believe that if our own local langaues are taught in all schools,it fosters national unity and coherence in our societies. Isu bamwe tolebeleka,totaura,siyakhuluma,tilawambula,toreketa,tikamba,we can speak,and this makes us fit in any society in Zimbabwe🤗

Nhayi hako iwewe, most Zimbabweans do not speak their own distinct languages well

Who asked u abt ur french

Idea is right lets first introduce ndebele in all schools then we will embark on these foreign languages.
We want to learn local languages, l hev in Binga recent it was a hard time l ended up speaking in ndebele

Awesome. I don't see any problem with adopting a foreign language.