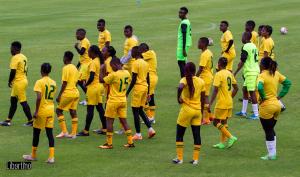 The Government is meeting the financial needs of the country’s senior women’s football team, the Mighty Warriors, who are in camp ahead of the final round of qualifiers for the Africa Women Cup of Nations (AWCON) finals against Botswana this month.

The Government has housed the squad at one of Harare’s top hotels instead of at the “dilapidated” ZIFA Village.

ZIFA accounts are currently inaccessible following the suspension of the entire executive committee by the Sports and Recreation Commission (SRC) in November last year.

Yes, it’s true (that the Government is taking care,). They are camped at a hotel in the capital.

The Mighty Warriors take on Botswana in the first-leg on 18 February at the National Sports Stadium.

The return leg will be at Obedi Itani Chilume in Francistown on 23 February.

Coach Sithethelelwe Sibanda called up 30 players into camp. Four of the players are based abroad and they are expected to join camp on Valentine’s Day.

The winners of the two-legged encounter will join 10 other winners at the finals in Morocco from 2-23 July.

The AWCON tournament will also be used as the African qualifier for the 2023 World Cup in Australia and New Zealand.

The top four teams in the Africa Women’s Cup of Nations will qualify for the World Cup.

THIS IS EXACTLY WHAT SHOULD HAPPEN THAT STATE TAKES CARE OF ALL NATIONAL TEAMS. THIS CAN NOT HAPPEN IF THERE IS BAD BLOOD BETWEEN ZIFA AND SRC.

COUNCILLORS MUST CHOOSE A NEW ZIFA BOARD WHICH IS CLEAN AND NOT CORRUPT OR TAINTED.