Government Cancels Chombo's Land Offer, Gives It To His Ex-Wife 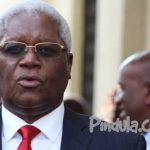 Part of Chombo’s farm has been allocated to his estranged former wife Marian, and some unnamed individuals who invaded the land.

In a letter dated 21 September 2021 and delivered to Chombo’s lawyers on 10 January 2022, Lands minister Anxious Masuka cited the government’s one man one farm policy, government policy on spousal rights to land upon divorce, and a court order in favour of Marian Chombo as some of the reasons for the lease withdrawal.

Earlier, in 2021, Masuka had written to Chombo, giving a lease cancellation notice, with the intention to allocate part of the farm to Marian Chombo and other settlers.

In response to the minister’s proposal, Chombo made reference to a valid 10-year joint venture which had invested more than US$2 million which the ministry had authorised as one of the reasons why it would be difficult to withdraw the lease.

The joint venture, which started in 2018 and will run until 2028, had resulted in investment in farming equipment such as centre pivots and a new farm manager’s house, among other improvements, resulting in increased production.

Chombo also informed the minister that although Allan Grange Farm was 3 000 hectares in extent, only 505 hectares is arable, hence the proposed subdivision would not be of much value to the new beneficiaries because the bigger part is covered by a range of mountains.

The minister withdrew the offer despite Chombo’s submissions saying the former Local Government minister will be allocated a portion of the land after the replanning exercise.

Commenting on the issue, a female lawyer and women’s rights activist said other former spouses of Zanu PF bigwigs should benefit from land in a similar manner.

She said Chombo’s case can be used by all former wives of political elites including Tambudzani Mohadi, Tracy Mutinhiri, Mary Chiwenga, Jocelyn Chiwenga, Florence Ziyambi and many more to acquire land.

Reply Report Abuse
Do that 4 months ago