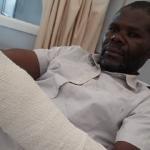 MDC Alliance has said the attackers were identified as James Marifani and Zaka and is urging the Zimbabwe Republic Police to take action. Said MDC Alliance:

#GoromonziSouthViolence Zanu PF thugs who violently attacked our members on Sunday in Goromonzi South have been identified as James Marifani & Zaka.

Here are images of our members who were violently attacked with machetes & knives by ZANU PF thugs on Sunday. We condemn the cruel acts of this violent, murderous, corrupt regime.

Some of our members were assaulted outside Mabvuku Police Station whilst trying to make Police reports. Political intolerance and violence must end and Police must not selectively apply the Law

There have been reports of assaults on MDC Alliance activists since two weeks ago when the party leader, Nelson Chamisa toured Masvingo and Manicaland provinces.

Some political analysts are convinced that the attacks are meant to instil fear in the opposition party’s supporters ahead of the 2023 elections.

I suggest reporting cases of political violence to ZRP is wasting time. It's better to revenge quietly, tit for tat. The Police is captured by ZANU. Ngachitsve hapana kusiri Kufa mhani!!

Very sorry indeed the political environment of Zimbabwe is in shambles

Political intolerance has been toxic in Zimbabwe the same as bad political provocation has managed to mare our political terrain.
I must say the quickest and easiest way to be told that you are "brain less and un educated" in Zimbabwe is to simply declare that you are a Zanu Pf supporter.
And after calling me brainless , surely I will show brainless.
It does not go without saying our political terrain it is mired with toxicity and hatred to an extent that violence is always a step away.

US$0 Harare
chibaba 6 months ago

The will simply say it was stage managed