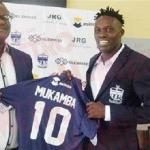 Denver Mukamba has said he is praying to God to bless Ngezi Platinum Stars coach Rodwell Dhlakama for giving him another chance when everyone had given up on him.

The former Warriors captain was clubless when Dhlakama recruited to join him at Chapungu in 2019 and later signed him for Ngezi when he was appointed the coach for the Mhondoro-based platinum miners.

Local teams including Dynamos and Caps United had released him over his wayward behaviour but Dhlakama, who coached the midfielder at junior level, took him and transformed him.

He told The Sunday Mail that he grateful for what Dhlakama did to him. Mukamba said:

Sometimes a lot of things happen in life, some bad; some nice. In life there are a lot hurdles, a lot of tribulations that I have gone through and to have someone like coach Dhlakama by my side is a blessing,.

He took me to Chapungu when I was down. He actually plucked me from the woods.

Now we are together at Ngezi, and my game has improved immensely under him.

It’s now like I am paying back the faith he showed in me when almost all the people had forsaken me.

I am praying to God every time, asking him to bless coach Dhlakama.

Dhlakama told the publication that he has never doubted the player ever since he began coaching him at Under-17 and Under-20 levels. He said:

I never regarded Denver as an outcast,” he told this publication.

As a leader you need to set an example and be proactive with disciplinary problems. Players need coaches who are firm and fair, and those who are consistent in terms of handling issues.

As a coach, you need to be knowledgeable about your subject to earn respect from the youngsters.

I was easy to accept Mukamba because he is one of the first crop of players I worked with in the junior national teams.

Mukamba says he still looks forward to playing for the senior Warriors team. He added:

I also want to play at big tournaments like the African Cup of Nations finals.

Given the chance, I am sure I will deliver the goods.

He has been in fine form in the Chibuku Super Cup and many are surprised that the performance did not earn him a call for national duty when Warriors coach, Norman Mapeza announced the team that will play in the last two World Cup Qualifier matches.