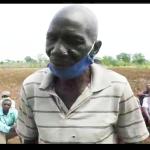 A 64-year-old man from Chiredzi says his family has had no peace since the end of November after suspected goblins started to put hot ash and soil into their food.

Newman Zukwa who resides at Zvemombe Village in Magudu Ranch in Chiredzi North told The Mirror that their woes started on a Saturday when out of nowhere, hot ash and soil were thrown into the food children were eating and later, his old father was pelted with stones from invisible hands.

The ash, soil and stones are also thrown on the bodies of the children resulting in severe pain and some sores. The attacks usually happen between 6 am and 12 pm.

According to The Mirror, Zukwa has three children, a boy and two girls.

The two girls and their grandfather (Zukwa’s father) have been targeted by the goblins.

The children have not been going to school since the attacks started last month.

Zukwa stays home with the children, his wife and his father. His first wife died in 2012.

The area has no chief and the Village Development Committee (VIDCO) chairman Nelson Maphosa confirmed the bizarre occurrences to The Mirror. He said:

I also went there and I witnessed the mysterious happenings. I saw stones being thrown on the two girls and Zukwa’s father has a scar he got from the attack.

Narrating his family’s ordeal, Zukwa revealed that he has been conducting prayer sessions with his neighbours but this has not helped at all. He said:

The attack started two weeks ago and the children and my father were the only ones affected.

The situation got worse last Wednesday and we could not sleep as the suspected goblins would be throwing bricks.

For the first time, I had to wake up neighbours and ask them to come and witness the mysterious things that were happening in my home.

The neighbours came and witnessed the throwing of ash which started at 4 am and lasted until 12 pm in the afternoon.

We see sand in broad daylight coming from nowhere and being poured into children’s food and at times we see ash and bricks thrown at the children.

When these things started I thought they will end soon but it’s happening every day.

I eventually had to gather neighbours for prayer sessions but this has not helped much as the children continue to be attacked.

A neighbour, Zachariah Toperesu suspected that Zukwa must have tried to get some wealth-enhancing charms and this is backfiring.

Chiredzi North MP, Roy Bhila (ZANU PF) said he visited the place after he got calls from the villagers and the situation is dire for the children.

US$0 Harare
Ungwas 6 months ago