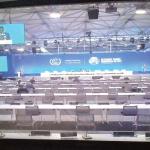 President Emmerson Mnangagwa’s visit to Glasgow, Scotland, for the COP26 Summit, was a missed opportunity for Zimbabwe to meaningfully engage world leaders on climate matters, an analyst has said:

According to Stephen Chan, Professor of World Politics at SOAS, University of London, Mnangagwa reduced his trip to the United Kingdom to optics and grandstanding on re-engagement with the West.

It seemed under-planned, without a clear strategy, and without any discernible lobbying or media expertise. It was a very expensive trip with no concrete results.

Chan said Mnangagwa’s visit had no significance for the country’s re-engagement drive which has gone off track in the past three years. He added:

Most of the British public had no idea Mnangagwa was visiting Britain. There were a huge number of important world leaders gathered briefly together in one place and many of them said important things about the environment — which is what the COP26 was all about.

In terms of re-engagement initiatives while in Britain, there was no impact whatsoever.

While other world leaders made headlines, the Zimbabwean delegation hogged the limelight for booze and partying in Glasgow.

Images of ZANU PF supporters clad in party regalia and pushing trolleys full of expensive booze were a public relations disaster for Mnangagwa.

Chan also dismissed Mnangagwa’s claims that he had made meaningful contact with Johnson. Said Chan:

My Foreign Office friends report no such activity or efforts to initiate any side meetings.

Chan asserted that despite Mnangagwa’s grandstanding, any re-engagement with the West would have to be premised on genuine political reforms.

Meanwhile, on his return home on Thursday, Mnangagwa bragged to ZANU PF supporters who had been bussed to welcome him at the Robert Gabriel Mugabe International Airport, saying Johnson was excited to meet him.

Private jet was necessary. They were hidden gems worth trillions, takuvaziva

US$8.00 Chitungwiza
Madala Banda 6 months ago

Hire Chan as minister of information for zimbabwe